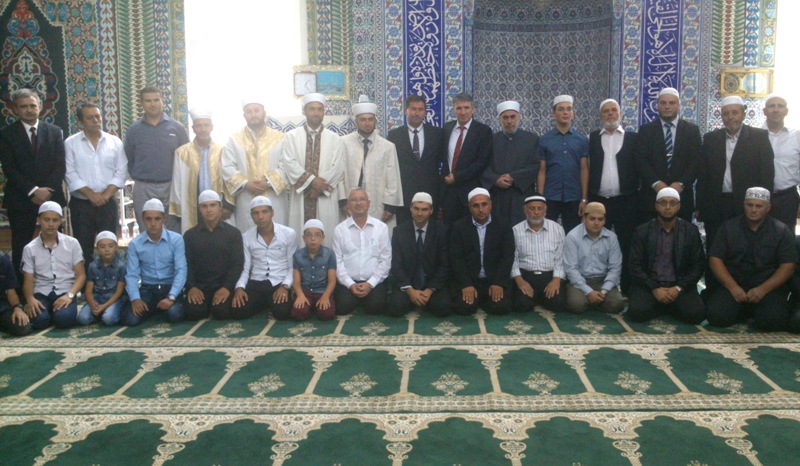 On 23rd of August, 2015, in the central mosque of the town of Madan a celebration was held on the occasion of the successful memorization of the Qur’an by the 15-years old Abdullah Hasan from the town of Madan. The celebration is the second of this kind, after in May the title “hafiz” received also Abdullah Hafuzov, also from the town of Madan. The event was attended by nearly 1600 Muslims from the region of Smolyan and neighboring Greece. Among the official guests were the Grand Mufti of the Republic of Bulgaria Dr. Mustafa Hadzhi, the Religious affairs attaché at the General Embassy of Turkey in Plovdiv – Metin Akbaş, the Regional Mufti of Smolyan Nedzhmi Dabov, the Regional Mufti of Blagoevgrad Aydan Muhammed, the Regional Muftis of Kardzhali and Krumovgrad Beyhan Mehmed and Nasuf Nasuf, the Mayor of the Municipality of Madan Fahri Molaysenov, the Director of SRS – Momchilgrad Ahmed Bozov, hafizes, imams and public figures from the region of Smolyan.
The event was opened with recitation of the Qur’an by hafiz Murad Hadzhi, who is a founder of the course for hafizes in the town of Madan, established in 1999 by Grand Mufti’s Office of the Muslims in the Republic of Bulgaria. The program continued with passing of examination of Abdullah Hasan in front of all attendees where under the guidance of the Director of the course hafiz Shefket Hadzhi the official guests opened the Holy Qur’an on any page and Abdullah easily managed to recite by heart the Words of Allah which admired and excited the audience.
After the 15-years old boy won his title “hafiz” the Regional Mufti of Smolyan congratulated hafiz Abdullah for the efforts and the patience that he had as well as his teachers and parents who supported him on the steep way, which he passed. The mufti said that the fruits of these efforts in the Course are available and urged the Muslims to pass this charge also to other places in the country. The Mayor of the municipality of Madan expressed his satisfaction that on the territory of his municipality exists such a course and thanked all who have contributed for its establishment and development.
The Religious affairs attaché at the Consulate General of Turkey in Plovdiv said that today we need to understand the Holy Qur’an along with the example of the Prophet Muhammad (pbuh) and to convey this knowledge to the other people.
The Grand Mufti reminded that the Almighty revealed the Holy Qur’an to the people in order to find their mission in this world. He turned to all attendees and said that if we want to be happy in this life and in the Hereafter we should understand and apply the Qur’an in our life.
And the Course for hafizes in the town of Madan is a good example with regard to this, educating people who will preserve the Qur’an and will pass it to the next generations.
At the end of the celebration the Grand Mufti gave a certificate to the young hafiz for the successful competition of the Course, and on behalf of the official guests were presented gifts.